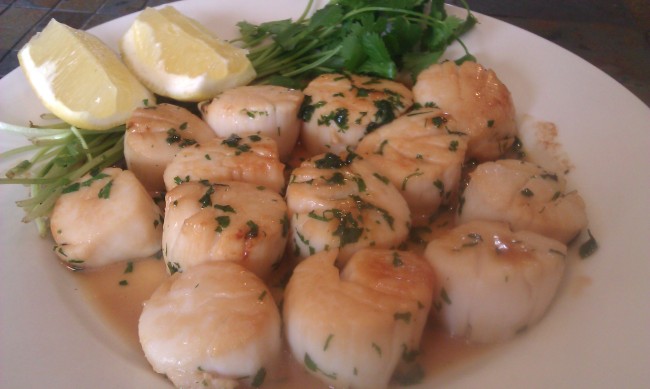 Scallops are a treasure from the sea, but due to over harvesting, were in declining populations until recently.  Federal regulations that started going into effect in the late 1990s have helped scallops make a huge comeback.  But inshore there are still far fewer sea scallops than there used to be, and so farmed sea scallops are now being harvested in the Northeastern Atlantic and Pacific.   Seafood watchdog groups list them as a good choice for people who eat seafood, as they can be harvested without damage to habitat and have low levels of mercury.  When you purchase scallops, ask your grocer where they came from, as some farmed scallops are imported from Japan!

Here is a super easy recipe for cooking sea scallops that is as healthful as it is delicious.  It should be served with Black rice, which takes longer to cook than white or brown, but is worth the wait, as it is more flavorful and better for you then either of the others.  Lundberg makes a Black Japonica rice that is an heirloom variety, which means it has not been genetically altered.  It is grown in an eco-friendly manner that conserves water, maintains soil integrity and supports a healthy ecosystem.

Brown the butter over high heat in a large saute pan. Add the scallops and allow to brown,  don’t move them around.  When they are cooked about halfway through, maybe 3-4 minutes, flip them over and brown the other side.  After 3 more minutes add the white wine, de-glazing the pan.  Add the cilantro and the salt and toss to coat.  Serve these delectable morsels with black rice and wedges of lemon.

One thought on “Cilantro Sea Scallops”